FredKitMaker B
Editor
posted on 1 year ago — updated on 1 year ago
1,890
views
Herpa has released a new 1/87 Scania CS 20 HD with a refrigerated box semitrailer decorated for "Heide Logistik." 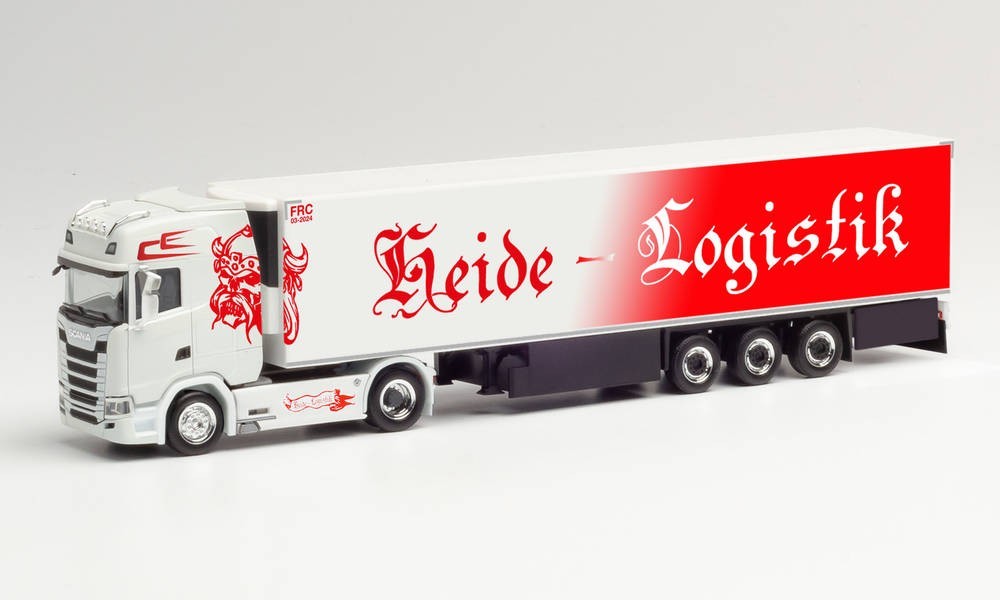 Scania's S-series is their high forward control cab semi-tractor. The S-series is marketed for long-distance operations and driver comfort. It can be configured with two cabs, a normal S-Sleeper cab or the S-Sleeper-Highline. The driver has two engine types to choose to power his rig, a 13-litre (Euro 6) or 16-litre (Euro 6), offering between 410-730 hp. Transmitting that power to the axles are Scania's range-splitter gearboxes, all of which come available with Scania Opticruise and Scania Retarder, plus a selection of power take-offs, and shifts of 12-speed or 12 2-speed. That power is carried upon;

...a wide range of 2-axle and 3-axle vehicles with different chassis heights. We also have a broad selection of front, rear, fixed and steered tag axles to match the requirements of any application.*

Rigid and tractor chassis can choose from several axle configurations,

Scania offers many options for the S-series as specified by the trucker.

The entire range is modular, giving a wide range of different configurations for different types of trucks. The trucks are available with engines ranging from a 13-litre to a 16-litre Euro6, ranging in power from 370-730 hp. A successor to the range was launched in August 2016 with new R-series and flat-floor S-series sleeper cabs.**

All of those letters designate particular characteristics of the truck. "C" designates a cab vehicle and "S" is Scania's long-distance outfit. "HD" is a Highline chassis height of a truck designed for Distribution. Next "ZM" is the suspension and duty type, Z: leaf-spring suspension front and rear; M: Medium duty, for transport on even surfaces. Finally, "20" is the distance between the front and rear wall in decimeters.

Scania has used its vast experience of both EGR and SCR to develop its Euro 6 engine range. The latest additions are the 13-litre, 6 cylinder 370 hp and the 16-litre, 730 V8, today’s most powerful Euro 6 truck engine.***

You can read all about it from the Scania website via Scania's new generation.

This Scania semitrailer truck is securely packed in a form-fitting plastic cradle which holds the truck and the optional pieces. (Herpa molds it with finger grips on the ends to help you remove it from the carton.) The cradle is held inside an end-opening carton with a large cellophane window.

This semi-truck is pulled by a 4x2 tractor. Six soft plastic-rubber hybrid tires, molded with tread detail and set  on chromed hubs, carry a detailed chassis.  The chassis is streamlined with aerodynamic skirts and fairings.

Under the cab interior is a 16-litre (Euro 6) Diesel/HVO engine. It is molded as one part. Most Herpa trucks I have reviewed have cabs that tip to expose the powerplant. Some tip easily. Some require a great deal of removing of grille or bumper parts to release the cab for tipping. I have only had a couple of models with which Herpa included instructions.

The refrigerated box trailer has a tab that locks into the fifth-wheel. The trailer does not have any "action" parts, except the landing gear which can be extended when the trailer is off the tractor - but they are so tight they are practically glue in the tank chassis.

Let's look at the detail. 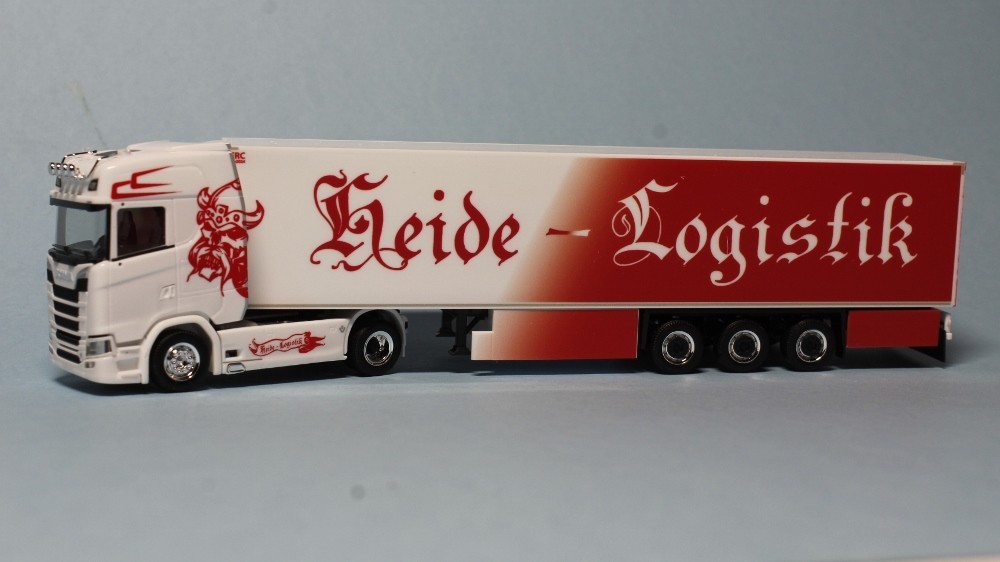 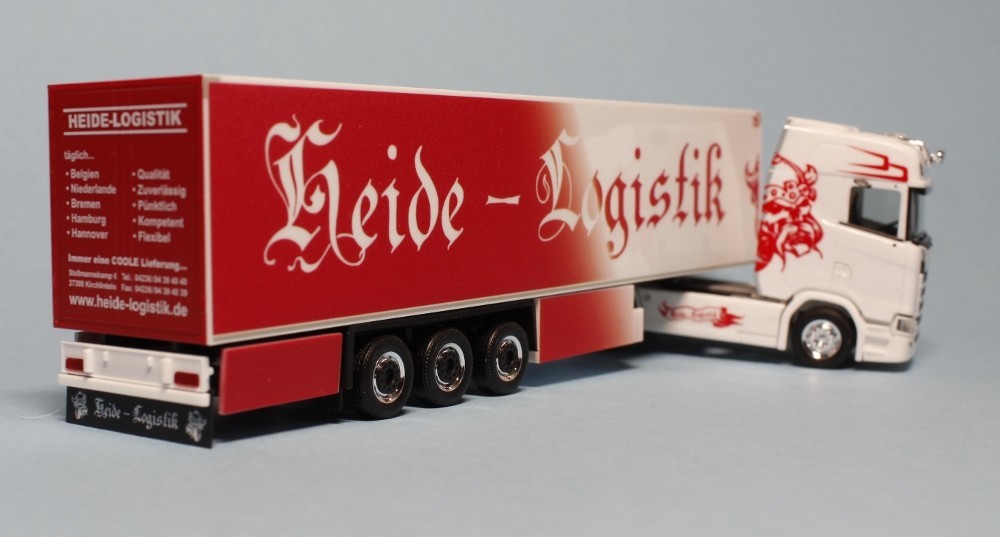 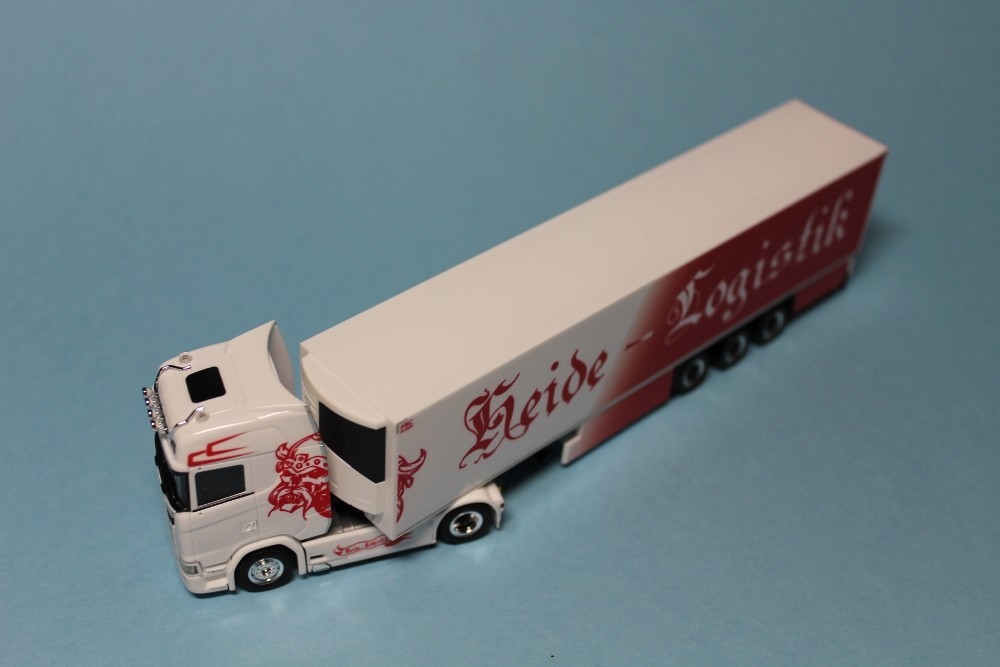 This tractor is a 4X2 tractor. Six detailed tires carry the chassis. That chassis is very detailed with axles, springs and shocks, fuel tanks and battery boxes, drive shaft, chromed exhaust unit,  and transmission and engine parts. The front axle can be made to allow the wheels to steer with Herpa's optional steering kit. The chassis is streamlined with aerodynamic skirts and fairings. Safety tread plate spans the chassis between the cab and the rocking fifth wheel. That fifth wheel has a fine molded release handle.

The cab body is crisply molded with smooth plastic. The grille, trim, front bumper, and light lenses are a multi-part assembly. Herpa models are designed to be assembled without glue. The parts are interlocking: the windshield clear part snaps into the cab body, held in place with help from the cab interior piece which is itself held in place by tabs that represent the door handles.

That cab interior is a piece sporting a lot of detail - seats and crew bed, console, cup holders, levers, steering wheel, and dash.

A model 16-litre (Euro 6) Diesel/HVO engine is under the cab interior. It is molded as one part. Many of the Herpa trucks I have reviewed have cabs that tip to expose the powerplant. Some tip easily but some do not at all, requiring a great deal of effort removing grille or bumper parts to release the cab for interior/engine access. I did so, the explanation is in Instructions, below.

Four optional mirrors can be mounted outside the truck.   Herpa made mounting holes for them along the windows and under the sun shade. Their plastic is flexible and their pins are a tight fit into the truck body.  They require finesse or they can be damaged.

A pair of chromed air horns are included.  But there is no indication where they are to be mounted.

Same as the tractor model, the wheels of the trailer are soft plastic with chromed hubs. A nice spare tire and cage are included. 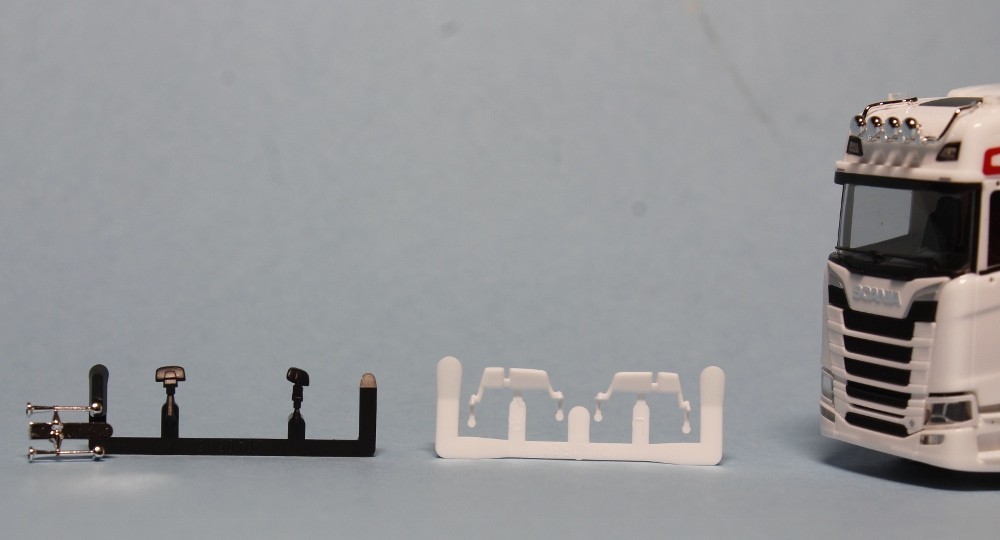 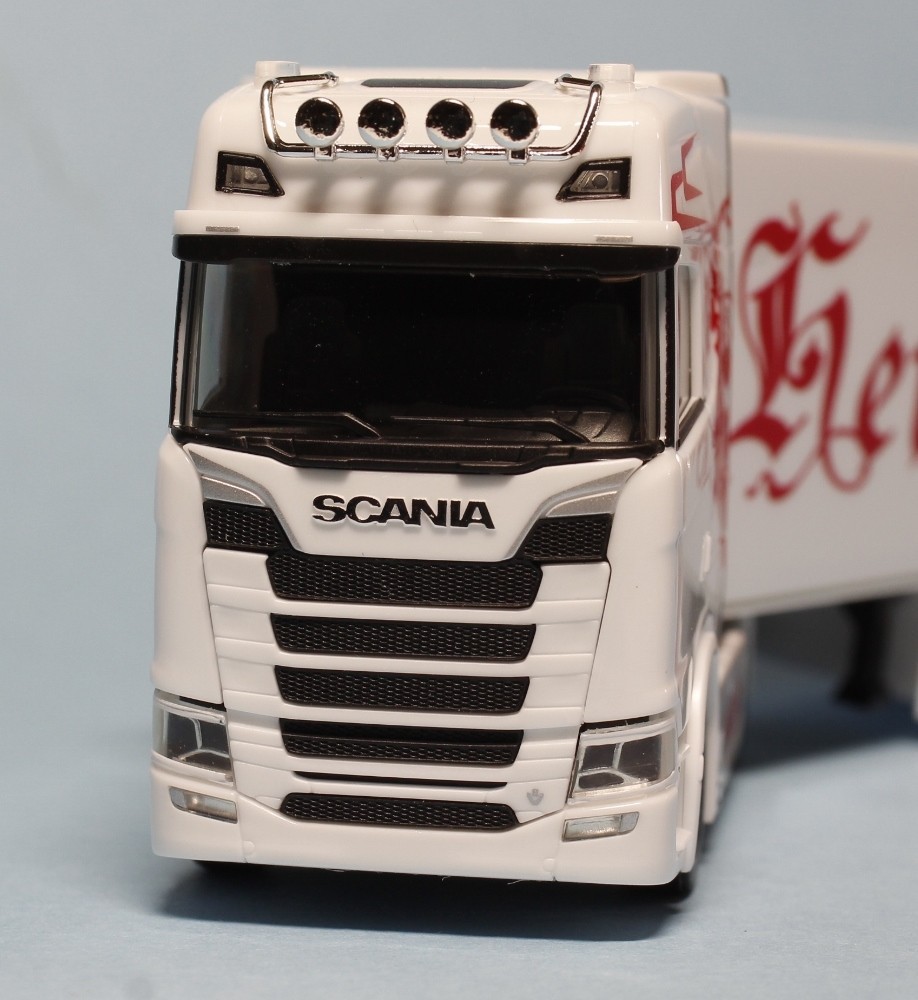 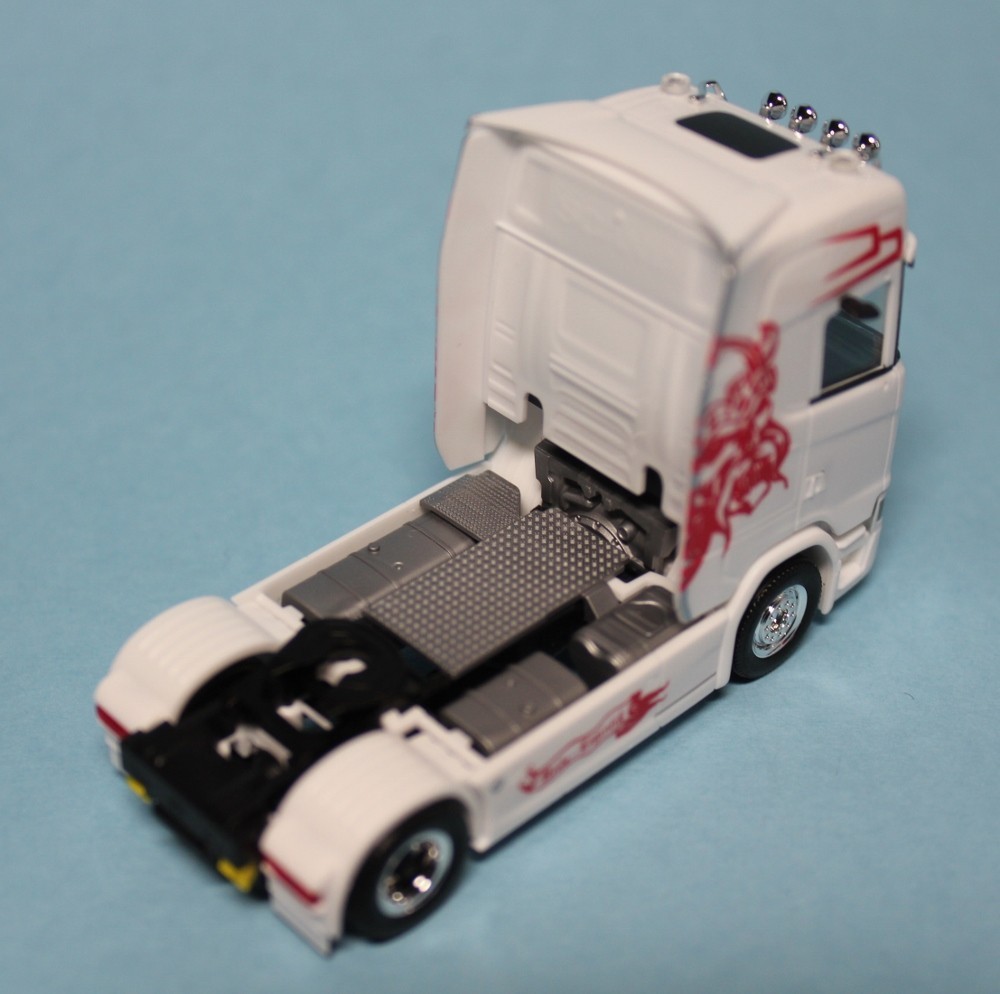 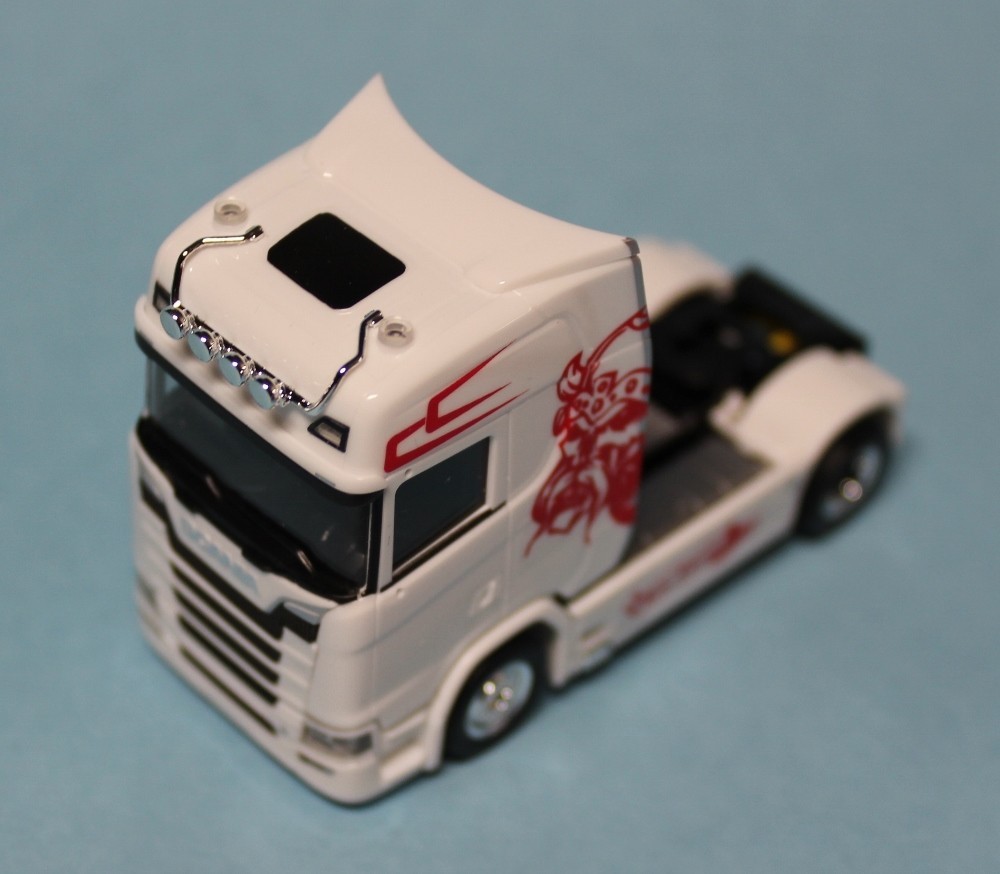 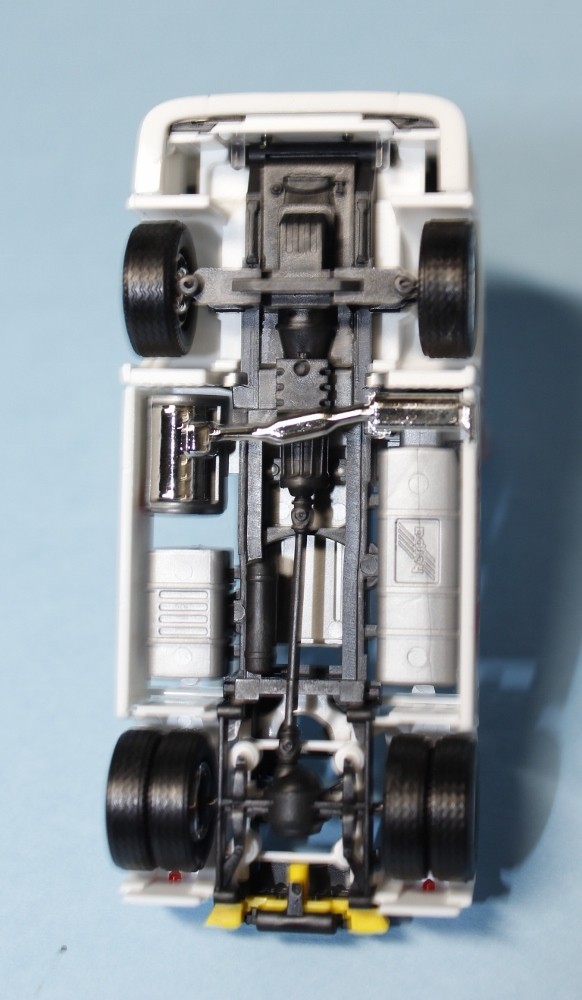 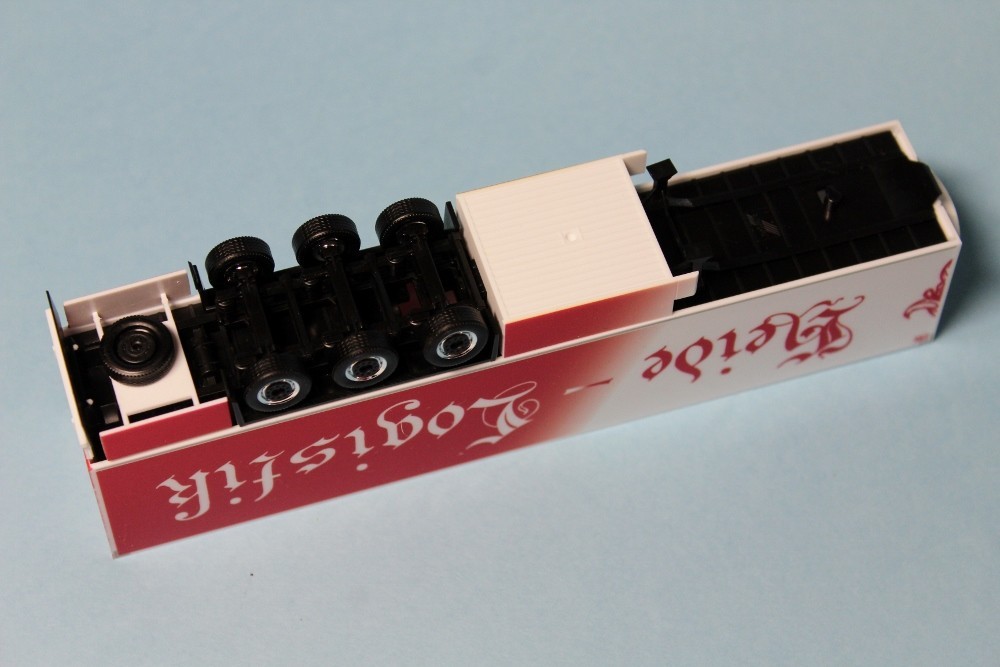 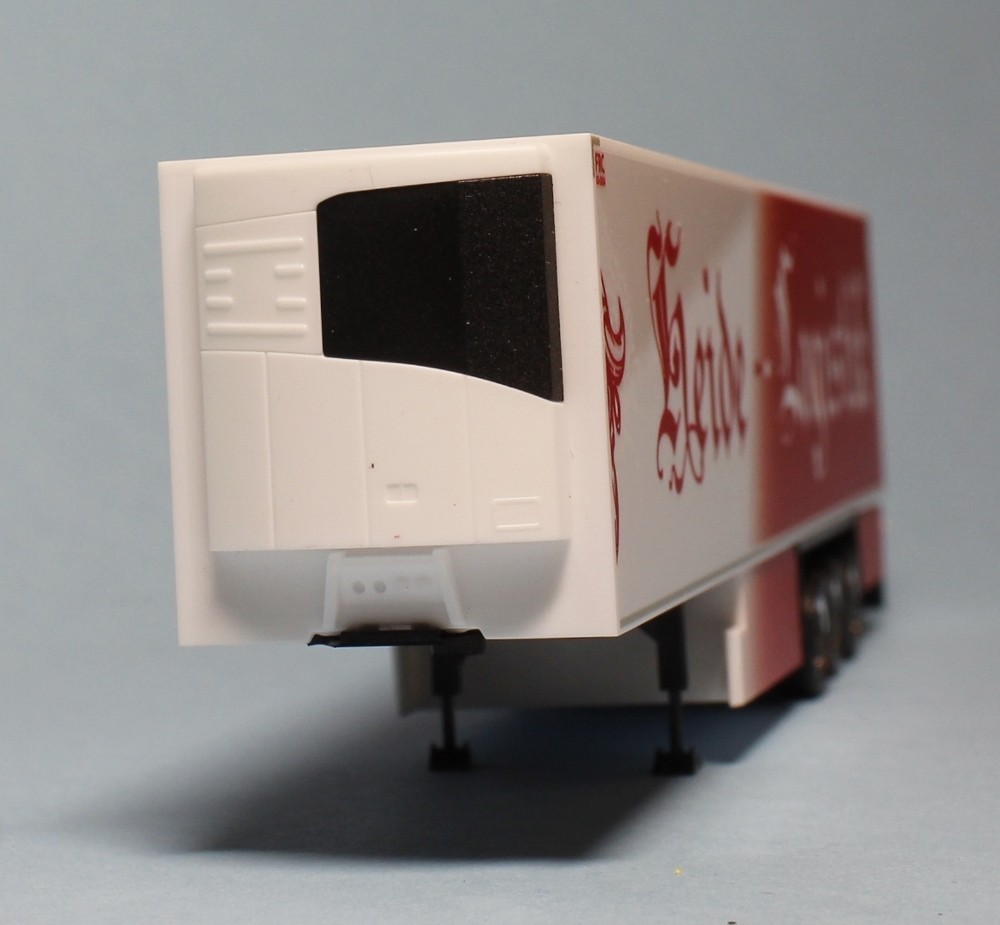 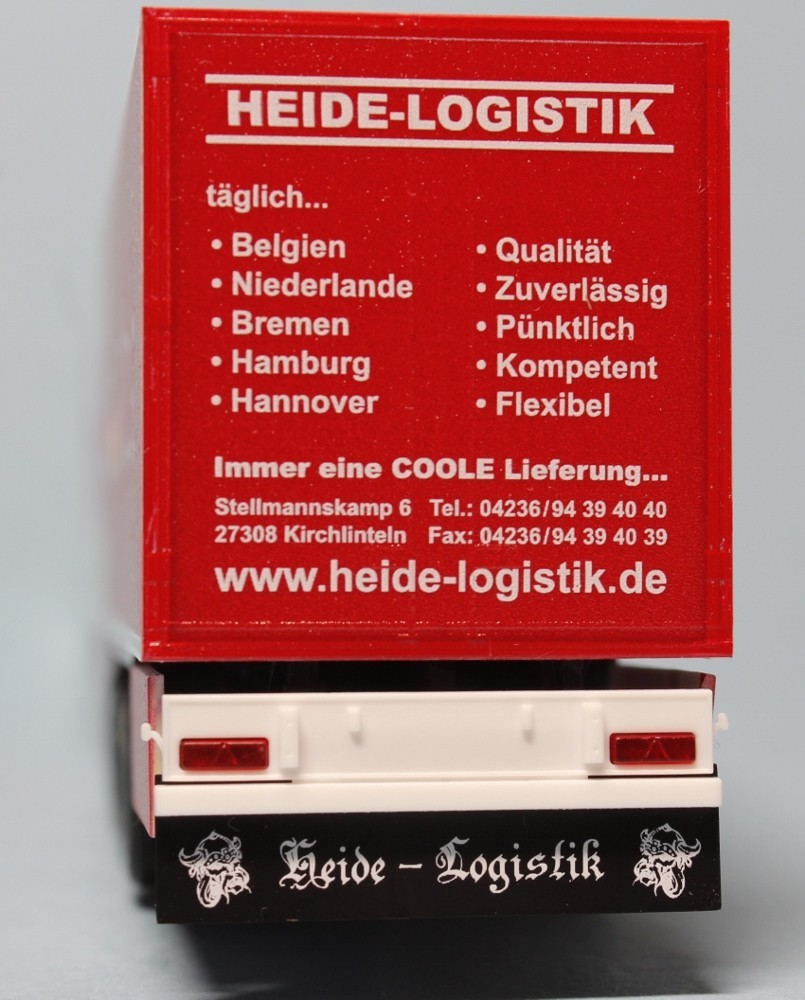 If you want to access the 16-litre (Euro 6) Diesel/HVO engine or cab interior, you are on our own to figure it out - no instructions. To access those internal goodies of this CS 20 ND, you must pry off the tightly fitted grille, headlamp strip, and several other parts. The cab does not tilt. It must be unsnapped from the chassis. That allowed the cab to come off and exposes the engine but the interior remains inside the cab. To access the crew compartment, gently pry the cab exterior away from the interior at the door handle, and lift shell off.

I have only inspected a handful of Herpa models with included instructions, usually for attaching the mirrors or opening the cab to reveal the engine. Happily, this model has a small sheet of instructions showing how to attach the mirrors - very useful and appreciated, especially for attaching the front mirror: to attach the front mirror, you must remove the sun shields (there are two of them) and that is not easy because they are very delicate, tightly fitted parts. Not mentioned in the instructions is that there are three tiny holes (approximately No. 75 / .021mm) in close proximity. If you don't hit the mirror hole first, the mirror interferes with reattaching the visors.

This model sports a colorful reproduction of custom airbrushed art.   Herpa paints the chrome and Scania emblems. Fine lettering is crisp and legible.

The model has a very glossy finish for the cab and skirts while the rest of the parts are muted.

Herps's Scania CS 20 Highliner Refrigerated Semitrailer is a striking model. It features excellent detail, finish, molding and assembly. The clear lenses for the lamps and lights are great, and the optional separate mirrors afford even higher detail.

If I have anything to complain about it is the difficulty in accessing the cab interior for detailing with a driver and accoutrements. Herpa's magazine Der Mass:Stab often features articles with trucks boasting interiors highly detailed by modelers.

Modelers of modern semitrucks, dioramas, and collectors of moderns semis should be delighted with this model. It can even blend with North American trucks. Another excellent Scania from Herpa. Recommended.

Please remember to mention to Herpa and retailers that you saw this model here - on Auto Modeler.